If we take voice interfaces(VIs) to be machines, then language is both the raw material and the final product – speech data is fed into these systems to train them, based on which they convert text to speech or vice versa. Hence, the key feature of VIs is the ability to convert human language into machine-readable language and vice versa. The four most significant technologies for enabling VIs, as listed by an Infosys Report in 2019, are text to speech (TTS), automatic speech recognition, natural language understanding (NLU), and natural language generation. 1Apart from these technologies, Rudnicky enumerated the following factors needed to design a VI: 2

Without this characteristic, the interface would be subject to systemic fluctuations in acoustic signals.6 This would lead to modifications in input conditions which would minimally degrade the performance of the interface.7 Building standardised models, thereby, would enable individuals to interact with VIs with high accuracy levels.8

In an empirical study conducted by Dyches et al ,9 724 participants in Ohio were approached to assess the current state of the interactive voice response (IVR) system for non acute primary care. However, only 42% of the participants were able to finish the telephone screening. The rest were not able to complete the IVR process in the research for several reasons. One of the most significant reasons cited was not knowing English. Hence, developing a VI in all local, regional languages would be a step towards making digital spaces truly democratic.

This idea, however, has not come to fruition because of the challenge involved in developing VIs in local languages. The major challenge is further reflected in a W3Tech survey, as depicted in Graph 1, which reveals that English was used by 59.5% of approximately 10 million global websites as of June 2020.10 The websites surveyed by W3Tech, however, include only websites that use technology and have “useful content”. To elaborate further, default web server pages and websites owned by domain spammers were excluded from the survey. In addition, subdomains and redirected domains were not included in the survey.

The aforementioned statistics become even more significant when we consider global demographics – only 527 million people in the world, out of approximately 7.2 billion, are native English speaking people.11 The population of native speakers12 of three languages, namely, all Chinese dialects combined, Hindi, and Urdu is higher than the native English speaking population.13 However, the use of these languages in website content in the two most populous countries namely China and India, are minuscule in terms of percentage. For China, it stands at 1.50%, while Hindi is behind at 0.1%. However, less than 0.1% of the 10 million (approximate value) websites surveyed accounted for using Indic languages such as Bengali, Kannada, Tamil, Telugu, Marathi, Punjabi, Gujarati, Oriya Urdu, and Assamese.14

Ultimately, to address language-related challenges, building an efficient VI equipped with multilingual support is the need of the hour. This requires the expertise of computational linguists to create the domain model –i.e., build the lexicon for NLU systems and fine-tune and debug the grammar for the same.15 Another main challenge is that it remains an expensive procedure as it requires the labour of individuals with a very niche skill set.16 Similarly, Levinson (1994) opines that the language accessibility barriers of VIs are predominantly compounded by the lack of technical expertise to create such devices. Though the recent trend of consumer facing VIs show that there is no dearth of technical expertise, the particular nature of voice and languages still create technological challenges.

To summarise, the reluctance to develop VIs in several languages is primarily linked to the low scope for profitability and the labour-intensive requirement of computational linguists. In addition to these factors, several additional impediments have been identified for the development of interfaces in (non-dominant) local languages: 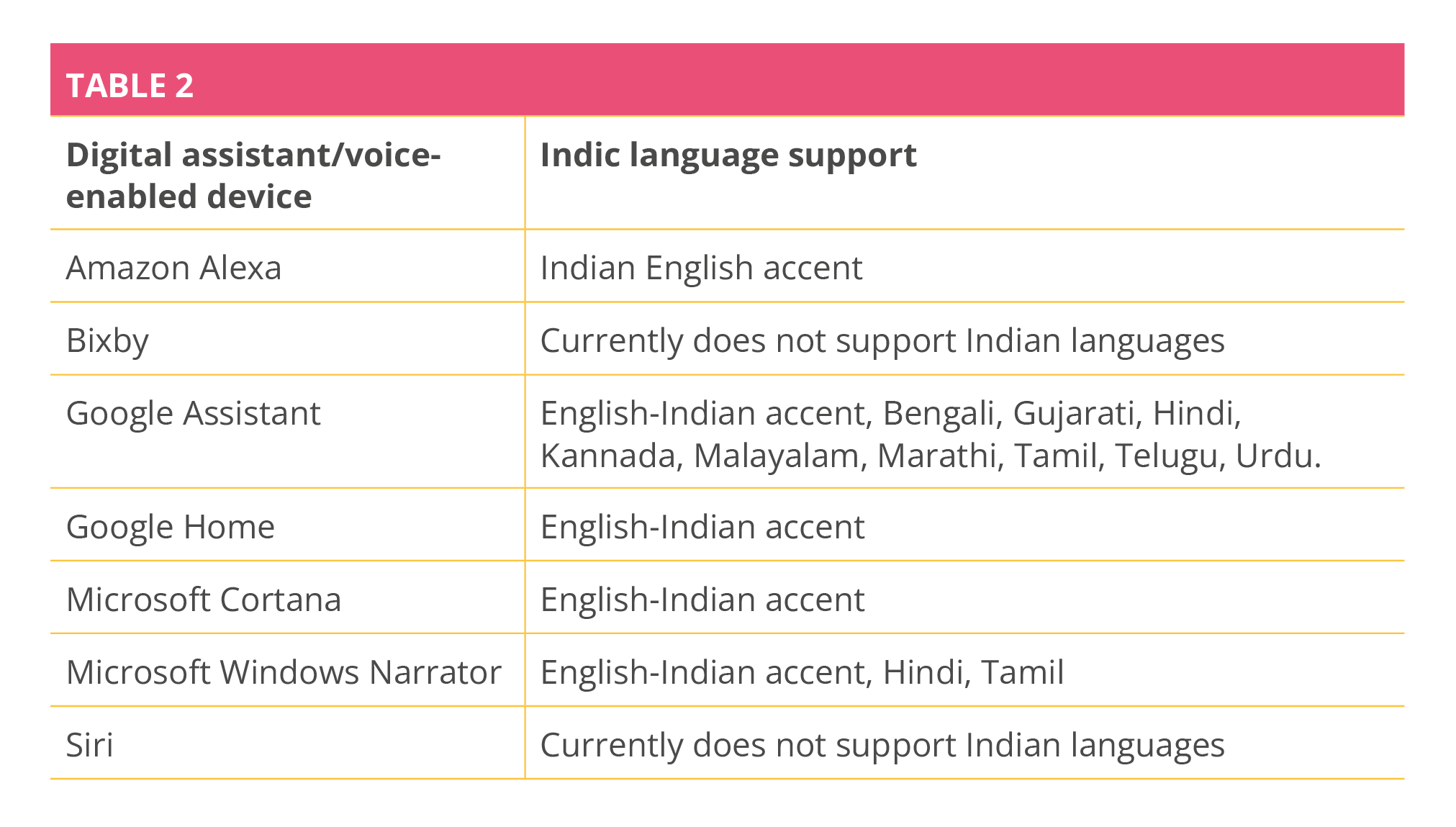 Paul (2017) opines that a possible method to resolve the linguistic limitations of VIs, is to train the device employing a VI to associate particular sounds with words.42 Training a machine to recognise sounds requires an extensive database of voice recordings on a wide variety of topics. The flexibility and accuracy of the VI are dependent on the number of voices and accents it is exposed to.43 Presently, several eminent organisations, universities, and government bodies have undertaken the challenging task of creating such extensive voice databases:

The Linguistic Data Consortium (LDC) was conceptualised in 1992 to enhance technologies to support language-based academia.48 LDC served as the leading language repository for educational institutions, corporations, and research institutes.49 The repository was formed as a result of the LDC’s collaborations with researchers, who are instrumental in evaluating the voice data collection. LDC also has agreements with 40 organisations to create a general corpus. One of them is Microsoft Research India, which deals exclusively with Indian language tagsets.50 A ‘tag’ refers to the “labels used to indicate the part of speech”, which also include the grammatical aspects of the language.51 A ‘tagset’ is a collection of tags made by organisations such as Microsoft that deal with corpus creation.

VoxForge is an open speech dataset that was set up to collect transcribed speech with Free and Open Source Speech Recognition Engines (on Linux, Windows, and Mac). 52 The submitted audio files have been made available under a General Public License (GPL) license and then compiled into acoustic models for use with Open Source speech recognition engines such as CMU Sphinx, ISIP, Julius (Github), and HTK.

M-AILABS Speech Dataset is the first large dataset that is available free-of-charge and usable as training data for speech recognition and speech synthesis.53 Most of the data is derived from LibriVox (which provides free public domain audiobooks) and Project Gutenberg (which provides free e-books). The training data consists of nearly a thousand hours of audio and text files in prepared formats

The National Platform for Language Technology (NPLT) is a platform for colleges, researchers, and companies to provide access to Indian language data, tools, and related web services.54 The NPLT acts as a marketplace of linguistic resources, tools and services developed by the government, start-ups, industries, and other stakeholders. The platform makes these resources available to interested entities, be it researchers, academicians, start-ups, or MNCs, for research and commercial purposes. It acts as a marketplace for Indian language data in both speech and text, with the aim of lending power to machine learning algorithms and improving the accuracy of models. NPLT also aims to provide a central point of “discoverability of Indian Language Data, technologies and services etc" to satisfy the data needs of both industry and academia.

Indic TTS is a joint initiative by the Government of India and 13 eminent Indian institutions. However, unlike Common Voice, which is a database for several languages across the world, Indic TTS focuses on 13 Indian languages. The special corpus consists of over 10,000 sentences and words spoken by both male and female speakers. The Indic TTS project also successfully launched an Android application for the TTS synthesis of 13 Indian languages. By utilising the unified parser, this application could recognise text input in 13 different Indian languages and render spoken output.

Lawrence hints that the Hindi language will be the next most represented language in speech technology. This is attributed to the fact that India is considered an emerging market economy. Similarly, large stakeholders in the digital economy, such as Google are working on the prediction that a large percentage of next-generation Indian internet users will be Hindi speakers as opposed to English speakers. Hence, Google is now taking measures to enhance its software user interfaces and products to cater to Hindi-speaking consumers. This step is incentivised by profits, but the silver lining is that it significantly addresses the ‘digital speech divide’ dilemma.

Voice-based technologies have the potential to make the internet more accessible compared to purely text-based interfaces. What people can do with the internet can be significantly increased and improved if they can communicate in their own language. However, the need for data and the ever-changing nature of languages and their contexts can be a challenge for interfaces in multiple languages. One can hope that the push towards more voice-based interfaces and the need for language data will bring in interest and funding towards the creation of language data corpora in more languages.